**The marked links and book covers on this page are affiliate links. If you use them to purchase something, I earn a fee at no additional cost for you. Disclosure Policy** 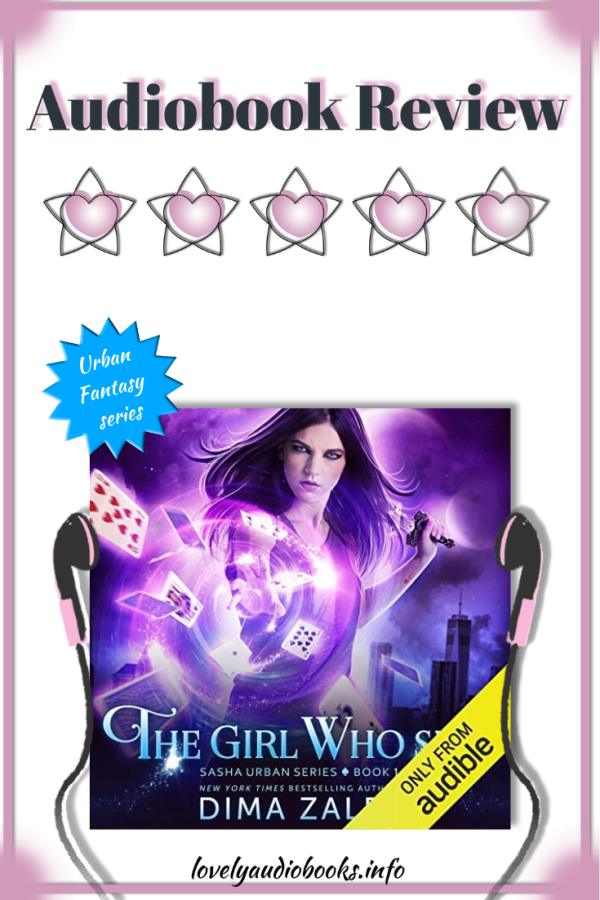 I stumbled over this series in the Audible Escape additions from January. With book 7, the series was completed in February 2020. And all parts are available in Audible Escape so you can merrily binge listen!

Add it to your Audible library**

What drew me in first was Sasha’s very unique occupation. She’s an aspiring illusionist/mentalist, getting her first TV opportunity in The Girl Who Sees. Up to this point, she isn’t aware of the supernatural world at all. She only does effects, not real magic.

The Sasha Urban series has a lot of really smart and unique concepts that I don’t want to go in for spoiler reasons. But I love how magic, supernatural talents, and gaining power work in this world!

I also liked that throughout the series, people get the chance to redeem themselves. There were a lot of shades-of-grey characters who were simply making emotional decisions instead of good or evil ones. This might well be a big reason why this series captivated me so much that I honestly could not stop listening. I finished the 7 novel-length audiobooks in a bit over a week! I just couldn’t turn them off.

While there were a few evil characters, many unlikely ones got a chance to shine later on. And things often developed in a very surprising way that I hadn’t seen coming.

I also felt that the level of quality was kept up throughout all 7 books. There were no dips or trope-y parts where I could have felt like the author was just padding the story. The twists and turns were always unexpected and unique up to the finale!

The only small piece of criticism – which was likely only caused by my binge-listening – were a few noticeable repetitive phrases. One was “beady eyes” (which sometimes seemed to be meant cutesy, and sometimes as shifty). And poor Kevin’s unibrow was also mentioned at absolutely every opportunity!

Emily Durante is a wonderful audiobook narrator! She has a fantastic range of voices so it’s always easy to differentiate between all the characters.

Her voice fits Sasha very well and it was a pleasure to listen.

If you enjoy Urban Fantasy and Paranormal Romance, grab the Sasha Urban series! It’s so entertaining and I’m sure you’ll enjoy it, too. Especially if you have an interest in Russian mythology and culture.

Aso, if you liked Ilona Andrew’s Clean Sweep, I’m sure you’ll have fun with Sasha Urban’s world, too.

The complete series is available in Audible Escape.

Add it to your library**

You can unsubscribe at any time by clicking the link in the footer of my emails. For information about my privacy practices, please read the Privacy Policy.